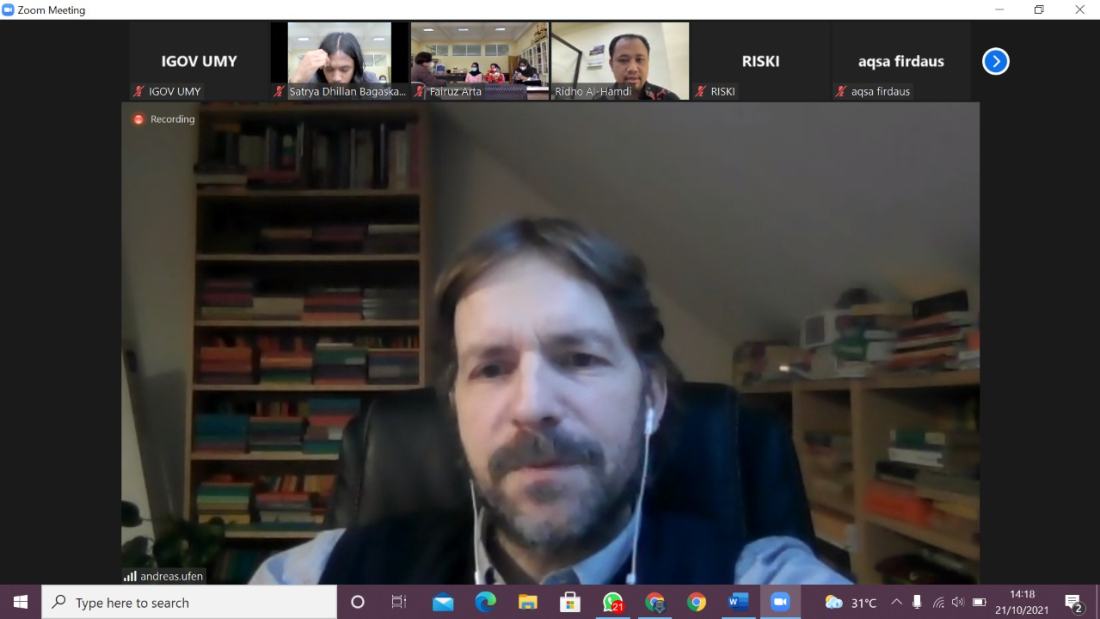 Kegiatan
Yogyakarta – Thursday (21/10) The third meeting of the Visiting Professor program at IGOV UMY raised the theme of Direct Presidential Elections and Its Effects in Indonesia and The Philippines was attended by 35 students of IGOV UMY via Zoom Meeting.
The program lasted for one week and was very anticipated by the IGOV UMY students even though it was held online. The visiting professor who taught the course materials was Dr. Andreas Ufen from German Institute for Global dan Area Studies (GIGA).
Many students showed their enthusiasm by asking a bunch of questions during the questions and answer (QnA) session. For instance, Satrya Dhillan Bagaskara asked Dr. Ufen whether there is a way to change an electoral system and whether there will be an impact on society due to the change.
Fairuz Arta who also participated in the QnA session asked, “Is there any specific case why every country has a different electoral system? What factors might influence the formation of an electoral system in a country?” he then added another question, “what is the most suitable electoral system for Indonesia?” such question was very interesting because as Indonesia, we are naturally curious about how foreign politics academician view the electoral system in our country. “Maybe Malaysia will create a more proportional system in the future, Cambodia already has FPTP but still has an authoritarian style. Meanwhile, Indonesia also struggles for creating a proportional electoral system. As for Singapore, they need to be democratic first,” responded Dr. Andreas Ufen to the question during his closing statement.
“The system is based on several things, geographical is one of the indicators. The Australian system is new with its single transferrable vote. Which one is better for democracy? Canada is the best with FPTP. Thailand changes its election system regularly. Thailand is semi-democratic since the military is very dominant and influences its system. Each country in Asia or South East Asia has a different election system.” Dr. Ufen added. (DA)